Death and Dying Through the Ages

Introduction
Dungeons and Dragons has undergone a great number of changes over the years - and some rules seem to get attention in each revision (Grapple - we're looking at you).  This blog post is going to explore the rules for death and dying in D&D using only TSR/WotC's printed books as sources.  Why not start with the current edition and work backwards? 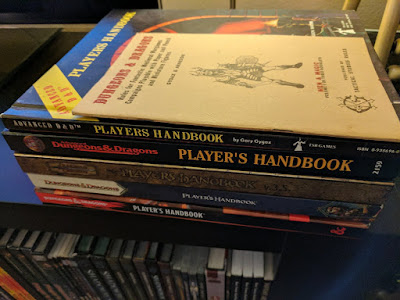 Fair warning - I've only played 3.5e, 4e, and 5e personally.  I guess I played a AD&D 2e one-shot, but I can't really count that.  Long story short, I'm hardly a D&D expert, so if I've made an error let me know.  :D  Please remember I'm only using the books as they are published - no errata, no websites, no Dungeon or Dragon magazines.

Instant Death
Instant death occurs when an attack drops you to zero hit points and enough damage remains that equals or exceeds your hit point maximum.  While this may seem harsh - instant death will not occur frequently.  The proper blend of a boneheaded PC and a harsh DM - sometimes combined with an unfortunate case of ghoul-induced paralysis could lead to death - but if you are keeping your wits about you instant death should be avoidable.

Going Unconscious
If by some unfortunate set of circumstances your PC takes enough damage to drop to zero or fewer hit points without killing you outright your character falls unconscious.  If you regain any number of hit points you regain consciousness.  Simple enough.

Death Saving Throws
If your turn begins and you are unconscious you make a death saving throw.  No modifiers apply (unless magic or special character features are at work).  Roll a d20, if you roll a 10 or higher you gain a success and if you roll a 9 or less you gain a failure.  Single successes or failures mean nothing by themselves.  If you collect a total of three failures - you're dead.  :(

Stabilization
An ally can stabilize another creature using his or her Action with a DC10 Wisdom (Medicine) check.

If no ally stabilizes you, all is not lost.  After collecting a total of three successes you become 'Stable' - this means that you no longer have to make death saving throws, however stable creatures do not regain consciousness.  A player who is stabilized but never healed regains one hit point.

Fourth Edition (2008)
Fourth editions death and dying rules are found on page 295 of the PHB.

Instant Death
Your character will die instantly in 4e if you take enough damage to reduce your HP to zero and then take enough additional damage equal to your character's bloodied value (1/2 your total hit points), you die.  In 4e unlike in 5e, you continue to track damage to your PC after death.  So if you had 5 hit points and took 8 points of damage you would be at -3 HP.

Death Saving Throws
Saving throws in 4e are a little bit different than they work in fifth edition, and in many ways they are simpler.  When you are unconcscious you must make a death saving throw at the end of each of your turns.  Any value under 10 is a failure, a 10-19 means that nothing has changed, and a 20 means you gain a healing surge (1/4 of your total HP) above zero and regain consciousness.

Its still important to keep track of your failed death saves in 4e.  If a player fails three death saving throws before taking a short or long rest you die.  That means that these failures can come in any order, during different periods of unconcsciousness or even different combat encounters.

Regaining HP
If you are dying and receive healing of any kind - your PC goes to zero hit points and you gain the number of hit points prescribed by the healing effect and regain consciousness.

Three-five has the concept of Massive Damage.  If you sustain a hit that deals 50 or more points of damage and somehow you survive this massive blow you have taken......MASSIVE DAMAGE.  You must make a DC 15 fortitude save and if you fail you die - regardless of how many hit points you may have in reserve.

Yep.  Save or die.  Thanks for that 3.5e.  My 14th level Paladin, servant of Pelor, defender of the Realm of the North, protector of the faith and hero to the people of North Coast, a character I have cultivated for three-and-a-half years is dead.  Thank to a single die roll.

Hit Point States
In three-five characters can be in a few hit point states:

Stable Characters in 3.5
For each turn after a character transitions into the Dying state the player must roll a d%.  He has a 10% chance of becoming stable.  If he does not, the character takes 1 point of damage.  If this occurs and a PC now has -10 HP, he is dead.

In order to prevent this cycle, a Dying PC can be stabilized using a DC 15 Heal skill check.  This stabilization does not zero out his negative HP bonus, it just prevents him from losing any more points.

Another way to become stable is to heal any amount of HP.  If you also regain enough HP to be at zero hit points, the character is considered to be in the Disabled state and becomes conscious.  If the character is healed to one or more hit points makes the character fully functional again.

Recovering
There is also a series of rules about recovering from damage with the care of a healer tending to their needs that invovles a bunch of percentage die rolls - while this is interesting I'm not going to cover it in detail here.  Check it out in the 3.5e PHB on page 146.

Hit Points
In AD&D, hit points are pretty simple.  When you have hit points you are alive, and when they are gone you are dead.  Page 141 puts it pretty succinctly:  "When a character reaches 0 hit points, that character is slain.  The character is immediately dead and unable to do anything unless some specialized magical effect takes precedence."

Massive Damage
As in 3.5, we see the Massive Damage rule in AD&D 2e.  Again, a single attack dealing 50 or more points of damage causes the player to make a Save vs Death (saves were very different in old timey editions).  If the save vs death is failed, the character dies.  End of story.

Poison
Poison is nasty in old school editions.  If a character is killed while poisoned and the poison still exists in his or her system for some period of time beyond his death.  If the poison is not dealt with and the character is revived, they will immediately begin to take damage again from the poison.

Update Aug 13, 2017:  Twitter user @merricb pointed out that a very popular optional rule at many AD&D tables is the 'Hovering on Death's Door' rule which allowed players to go into negative hit points.  I wondered why I hadn't seen this rule and it turns out its in the Dungeon Master's Guide on page 104 of the second printing.  Thanks Merric!

This rule is similar to the 3.5 rules - when you reach zero or fewer hit points you fall unconscious, and then lose 1 HP each round until you hit -10 HP at which point you die.  Allies could use their round to patch up a fellow party member to stop the bleeding and prevent them from slipping into death's waiting grasp - or "....if a cure spell of some type is cast upon him, the character is immediately restored to 1 hit point - no more."  The Heal spell had its normal effect.  In all cases a caster who went unconscious forgot all of his prepared spells due to the stress of the event.

In 1st Edition Advanced Dungeons and Dragons when you ran out of hit points, you died.

In AD&D, there isn't a section for death or dying, but the 'damage' rules are on page 105. It simply states the following:  "Damage is meted out in hit points.  If any creature reaches 0 or negative hit points, it is dead.  Certain magical means will prevent actual death, particularly a ring of regeneration."

These rules are clear, understandable and unflinchingly rigid....unless you have a magic item that lets you cheat death.  Thats so OSR.

"Dungeons and Dragons: Rules for Fantastic Medieval Wargames Campaigns Playable with Paper and Pencil and Miniature Figures, Men and Magic, Volume 1 of 3 Booklets."  It took us a while to whittle that mouthful down to what we call it today:  a role-playing game.

On page 18 of this booklet it explains hit dice.  Rather than try to interpret or retell what is written there, I've just typed it in exactly as it appears in this book.

"Dice for Accumulative Hits (Hit Dice):  This indicates the number of dice which are rolled in order to determine how many hit points a character can take.  Plusses are merely the number of pips to add to the total of all dice rolled not to each die.  Thus a Super Hero gets 8 dice + 2; they are rolled and score 1, 2, 2, 3, 3, 4, 5, 6.  This totals 26 + 2 = 28, 28 being the number of points of damage the character could sustain before death.  Whether sustaining ccumulative hits will otherwise affect a character is left to the discretion of the referee."

Simply put - your character gets a number of hit dice.  Those dice are rolled at character creation and  thats how many points of damage you can take before death.  If you take more you are dead.

Conclusion
Dungeons and dragons has certainly taken a few different approaches to how to handle character death.  Each edition seems to make PCs more death-resistant, more durable, and more save-able.  I'd like to think that its because PCs today are more important to us than they were in 1974.  Maybe that's true, but maybe not.  As Dungeon Masters (or referees as we would have been called back in 1974) and players - we stand on the shoulders of those amazing PCs and NPCs that braved actual death in each combat encounter to help shape our game.  Some of them even became parts of the lore that we now think of as canon when at one time they were just characters in someone's home game.

I hope that you've enjoyed my brief synopsis of the death and dying rules through the ages.  Did I miss anything?

Posted by criticaleyerpg at 10:55 PM