Savage Worlds is NOT Simple 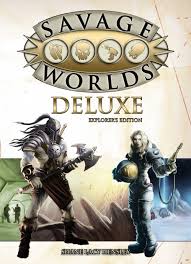 Introduction
All over the place you hear the Internet evangelising Pinnacle Entertainment's Savage Worlds roleplaying game system. And why shouldn't they?

Savage Worlds is a capable setting-agnostic system that effortlessly handles any adventure you can dream up. A common theme among these evangelical ramblings is that people will tell you that Savage Worlds is simple. This description of the game is, in my view, both reductive and false. The following post is an effort to demonstrate exactly what I mean.

I work professionally as a software engineer. In my field we would use the term "elegant" to describe a system which demonstrates the properties Savage Worlds does. The system specifies rules for everything you need and nothing you don't. When a rule can't be defined to its fullest in the core book without violating its setting-agnostic nature, Savage Worlds gives a generalization that empowers the GM and player to adjudicate the situation with, well, elegance.

Gunplay
Gunfights and firearms in Savage Worlds are intricate and detailed and often times the rules related to specific weapons and their properties demonstrate their crunch. Here’s an example touching only on the Rate of Fire of a weapon and how it affects character options:

Phew! And that’s just a few things related to weapons and how their rate of fire and Semi-Auto / 3RB / Automatic properties interplay with one another. I didn’t even discuss Armor Piercing rounds, incendiary rounds, weapon caliber, reloading different weapons, shotgun areas of effect or any other cool gun-related rules that you can find in the Gear section of the core book.

Armor
Armor in Savage Worlds is actually fairly straightforward. It provides a simple boost to a character’s Toughness – the amount of damage that must be exceeded to actually damage a foe. Armor Piercing rounds ignore a certain number of points of armor. Weapons define this value on an individual basis.

To clarify, AP rounds do not cause you to ignore a certain number of Toughness, just armor. If a character has a Toughness of 7 and 2 points of that are from armor, AP rounds that ignore 4 points of armor don’t reduce the target’s toughness value to 3, they only reduce it to 5. … Unless of course, that Armor is Kevlar armor. Through the magic of woven fibers, Kevlar binds bullets and therefore ignore 4 points of AP rounds. In our previous example if our target was wearing Kevlar then the attacker would gain no benefit from a weapon with AP 4 rounds and would still need to deal more than 7 points of damage to harm his target. Simple, right?

Movement
Movement in Savage Worlds is very detailed. There are different speeds defined for standing, crouching, crawling, difficult terrain, and jumping. There is also an amount of movement that is consumed when you get up from prone – which boosts a character’s Cover (see below!).

Cover, Lighting, and Obstacles
Like Movement, Pinnacle didn’t slouch when it comes to providing rules for Cover. There are definitions for Light, Medium, Heavy, and Near-Total cover. These varying levels of cover provide steadily increasing penalties to attack rolls against targets hiding in these levels of cover.

In addition to the accuracy penalties that attackers take when targeting enemies in cover Cover, the type of obstacle the target is hiding behind boosts the target’s armor. Glass windows, interior walls, car doors, heavy wooden doors, cinder block walls, brick walls, stone walls and more grant you varying armor bonuses from +1 to +10 in addition to the benefits of being in cover.

...and don’t forget If targeting an enemy who is in dim light, darkness, or pitch darkness, there are additional penalties to accuracy. Keep this in mind when you are in combat in which cover, darkness, and obstacles are in play!

Cannons, Air to Air Missiles, Surface to Air Missile, and Anti-Missile Systems
I’m not going to say anything about this other than to say that Savage Worlds has sections for all of these things including another section for Anti-Missile Countermeasures.  I think that's pretty awesome.

Airbags, and 4 Wheel Drive
There are a TON of great situational rules for vehicles in Savage Worlds, but I wanted to highlight a couple to show just how deep the system goes. 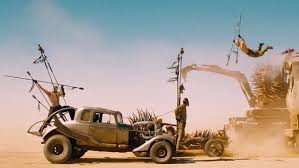 In the vehicles section of the Gear chapter rules are dictated for what happens to passengers in a vehicle in the event of an accident. That damage is halved if the vehicle is equipped with airbags, so you might want to take a second look at that Volvo station wagon.

Four wheel drive reduces the difficult terrain penalty for vehicle travel. This rule is fairly straightforward (dare I say “simple?”), but like the airbags rule it is specified, simply and clearly for anyone who might need it.

Taunt and Tests of Will
Taunts and Tests of Will are combat options that make combat more interesting. While not inherently complex, these options really add to the already long list of player options in combat that can help an outmatched party to overcome their foes.

Tricks include things like throwing sand in an opponents eyes or feinting left when you really go right. This causes the target of the trick to lose some of their Parry which makes them easier for your allies to hit.

A Test of Wills occurs when a character Taunts or Intimidates an enemy. When such a maneuver is successful, it grants the victor a bonus on follow-up attacks against that enemy, since the target is now intimidated or enraged.

Hindrances and Bennies
Players in Savage Worlds select Hindrances at character creation. These can be nervous ticks, hints at an interesting backstory, physical maladies, vices or any number of other flaws that make your character….well, more of a character. Lots of roleplaying games provide these kinds of options at character creation, and in most of these games this kind of stuff is forgotten before the first session begin and it simple Never.  Comes.  Up.  Again.

Savage Worlds makes them stick. It does so by providing a game mechanic that players will definitely want to use: Bennies. When a player emphasizes their character’s hindrances or makes a sub-optimal decision because of them – the game master flips him or her a benny.

Later when the dice don’t go the player’s way or when a character takes a ridiculous amount of damage they can exchange their bennies to re-roll or soak damage. Because of this “benny economy” the character hindrances come up again and again, which reinforces the roleplaying aspect of the character. It’s truly a win-win for min-maxers and tabletop actors alike.


So there you have it. This article Is not intended to scare anyone away from the system.  Quite the opposite in fact!  Savage Worlds is not simple, its elegant, complete, and detailed.  While I didn't cover the entire rulebook, I hope these few examples helped to demonstrate the depth the game brings to the table.

It can be every bit as crunchy as you want it to be.  There is an incredible amount of information crammed into the small form factor 200 page core book!

The game doesn't feel heavy at the table.  It feels simple!  It feels easy!  It feels like you're doing less bookeeping (because you are)!  Its no wonder so many people (mistakenly) say that it's simple.  Despite its depth the game feels lightweight and easy.

What do you think?  Am I wrong?  Share your thoughts in the comments!
Posted by criticaleyerpg at 7:47 PM 2 comments: